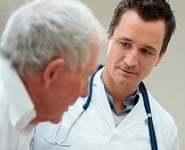 Is your "Senior" membership category out of balance? How are fees and policies related to that category impacting the club's financial health?

CB Member Resources: In this article we'll be looking closely at two slides: Senior Members and Senior Membership Count as a Percentage of Full Membership Count. If you are a Club Benchmarking subscriber, you may want to LOGIN to your CB account now and run the Membership Report as the first step in deciding whether your club might have "Senioritis."

Benchmark Study: In the United States, the Baby Boomer generation’s sheer size is affecting the economy in a number of ways. Boomers were born from 1947 to 1964, the eldest (the tip of the iceberg) are now in their early 70s. This demographic shift has been referred to as a “gray tsunami” and reports from various agencies have confirmed that Social Security, pension programs and the healthcare system are all feeling the pressure. It could be time to take a closer look at what that growing pool of “senior members” is doing to the financial health of your club.

Most clubs offer a senior membership category which includes reduced dues. The logic behind it is good – longtime members should be rewarded for their loyalty and a discount makes sense given retirees live on fixed incomes that don’t allow for continued payment of full dues. At some clubs, older members qualifying for the senior category have to relinquish their voting privileges in exchange for that discount. Again, the logic is solid. Many clubs have learned the hard way that older members can be disinclined to approve progressive capital improvement plans focused on younger members.

So if senior memberships reward loyalty and allow the club to remain relevant for the next generation, what’s the problem? It’s a relatively silent condition we’ll call “Senioritis” and aggregated club industry data suggests that if not properly understood and managed it may take a toll on your club’s financial performance. To understand whether a club fits the diagnosis, let's start by doing the math. The chart below offers a closer look at data on Senior Membership Count. In 2018, the median across the club industry was 31 members in the senior category while at the 75th percentile the count leaps to 77 or more senior members. 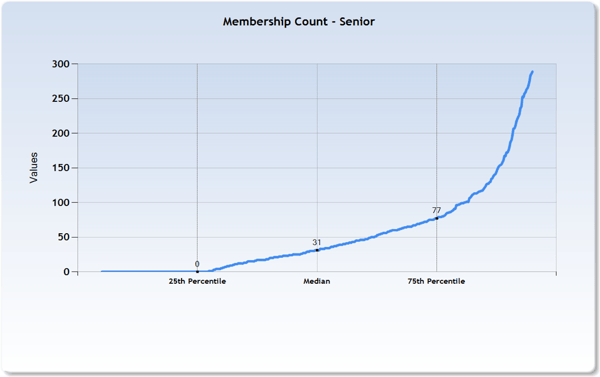 The next chart (below) from the Club Benchmarking Membership Report illustrates the ratio of Senior Members to Full Unrestricted Members. This ratio can be the key to understanding whether your club is suffering from “senioritis.” In 2018, the median for all clubs was a ratio of 14.8 percent. At the 75th percentile the ratio of seniors to members paying full dues climbs above 25 percent. Obviously a lower ratio is desirable in a scenario where full members are contributing to dues revenue at a higher rate. Increasing the number of full members is the solution, but as we’ve seen over the last decade, that may be more easily said than done. 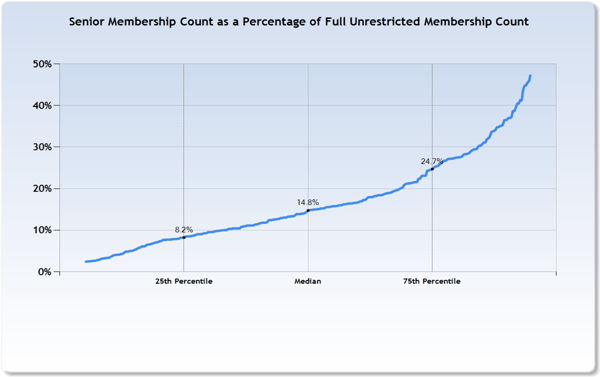 Once you've run the calculation to understand your club's position on the industry curve, it’s time to take action. Preventing or curing “senioritis” begins with a review of senior membership policies to evaluate the point at which the associated dues reduction kicks in. Qualification for senior membership is typically an equation based on a combination of the member’s age and how long they’ve been a member of the club. As an example, if a club uses a “Rule of 85” to determine senior status, a 65 year old member who joined the club in his or her early 40s would qualify.

Raising dues for seniors is unpopular, but some clubs have successfully implemented a gradual adjustment of the equation used to determine eligibility. For example, moving toward a more acceptable combined age and membership term of 95 or 100 over the course of several years. Current senior members would be “grandfathered” in.

Another factor that can make a club more susceptible to “senioritis” is a membership cap. If seniors are included in the total and that cap is set too low to account for the influx of baby boomers, the club is probably exhibiting symptoms including a demographic bulge, a predominance of gray hair in the dining room and subpar financial performance. Raising the cap and/or removing seniors from the calculation will allow for growth in membership categories where dues are higher.

When a club’s ratio of senior members to full unrestricted members is too high financial health may suffer, but simply arguing for a change in senior membership policy because it “seems like” the club population is shifting is not enough. Use your club’s Senior Member to Full Member benchmark relative to a peer set or the industry aggregate to identify a ratio that will support financial health while still showing appreciation for older members. Once you’ve established that goal, the board can make strategic decisions about what policy changes or other adjustments might be necessary.