Golf Course Maintenance:How Much Should You Spend? 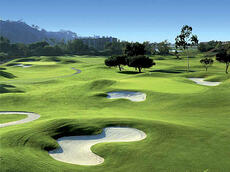 The industry debate over how much a club should budget to maintain its golf course seems never-ending, and that’s understandable. The course consumes a significant portion of the cash required to run a club and it is also one of the most visible and member-impacting amenities, so a high degree of focus is justified.

As a start, let’s consider the following scenario: While the median club in the country spends close to $1.2M on course maintenance, two clubs within a few miles of each other spend $700K and $1.75M respectively on their 18-hole courses. We all know, and have probably played at, clubs on both ends of this spectrum.

The Usual Discussion
Since we began working in the club industry in 2010, we’ve had the opportunity to interact with leaders of hundreds of clubs across the country. Typically, the discussions we hear about course maintenance budgets involve benchmarks such as cost per hole or cost per acre and a variety of specific characteristics ranging from type of grass to geographic location. To understand the way in which these factors might be used determine how much money a club spends on course maintenance, we undertook extensive analysis of club industry data, studying clubs that range in annual revenue from $1M to $40M, exist in nearly every state in the country, have nine through 108 holes, grow every type of grass and see variation of seasonality, weather conditions and rainfall.

The Business Model View
The data revealed that while traditional benchmarks (cost per hole, cost per acre, cost per member, type of grass or geographic location) may represent the actual spending of an individual club, the simple fact that the club up the road is spending more on their course than you are is not enough to justify a decision to beef up the budget. So, how much should you be spending? Contrary to conventional wisdom, our research clearly shows that the answer is ultimately not determined by some combination of physical characteristics. The reality is that clubs spend what they can afford to spend.

Before you dismiss this idea as random or arbitrary, consider this: The amount a club can afford to spend is eminently quantifiable and can be easily and accurately benchmarked. The proportionality of spending in clubs is highly consistent and represents the foundation of the common club business model. See the pie chart below for the proportionate distribution of gross profit (the money a club has for funding fixed operating expenses) including the portion spent on course maintenance, across all clubs. It is important to note that the proportions shown, +/- a few percentage points, are consistent across the entire industry, independent of club size (based on total operating revenue) or geographic location.The business model of clubs, as defined by data from the industry itself, defines these proportions as the benchmark. So roughly one-third of a club’s gross profit (don’t think revenue) is the affordability at the average club. 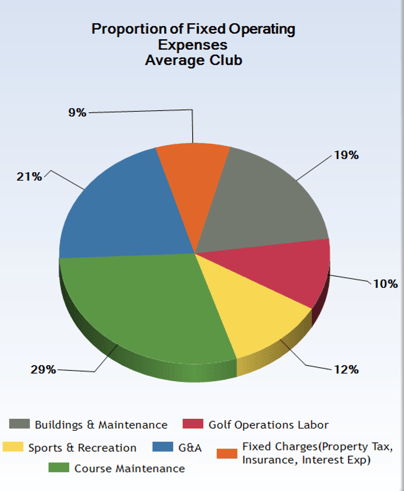 Course Maintenance + Sports/Recreation Spending = About 40 Percent of Fixed Operating Expenses
We also studied the range of club types among those with golf— from pure golf clubs to full-service country clubs with more diverse amenity sets. What we discovered is that for a diverse club, like the one on the right in the chart below, the combination of course maintenance spending and other sports/recreation spending uses about 40 percent of a club's gross profit. With no other sports amenities to fund, a club with only golf like the one on the left in the chart below, typically spends a little more on course maintenance—around 40 percent of its gross profit. That pattern has proven to be consistent across the industry. 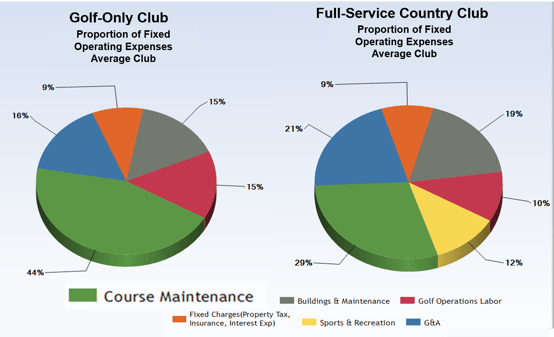 Different but the Same
Going back to the range of course maintenance spending referenced at the beginning of this article (from $700K to $1.75M), would you conclude that one club is spending $1M too much or that the other spent $1M too little? Of course not. We know each course can be beautiful and a pleasure for its members. In fact, those examples are from real clubs located just a few miles from each other. They are spending 32 percent and 34 percent of their gross profit respectively on their course—nearly identical spending from the business model and affordability perspective. Any of the traditional measures, cost per hole, cost per acre, geographic location, etc., would have led to a very different, and incorrect, conclusion. The broad value of this model is further realized when one understands that it doesn’t matter whether a club has 18, 36 or more holes. The affordability, a.k.a. the proportionate spending on course maintenance, doesn’t vary based on hole count, number of acres, type of grass, etc. As supported by industry-wide data, the only driver of a club’s course maintenance budget is affordability. Clubs spend what they can afford!

On the margin, there is naturally some variation. Golf-only clubs, with less competition for cash resources going to other amenities tend to spend a higher proportion of their gross profit (into the low 40 percent range) on their course, while very large clubs, or clubs with significant non-golf sports facilities tend to spend in the high 20 percent range. The national median is 30 percent of gross profit going to course maintenance. The split between course spending and non-golf sports spending is actually an indicator of the "golf club vs. family club" strategy of the club. Geographically, there is variation on the margin, but only a few percentage points from the national median, as per the data map below. 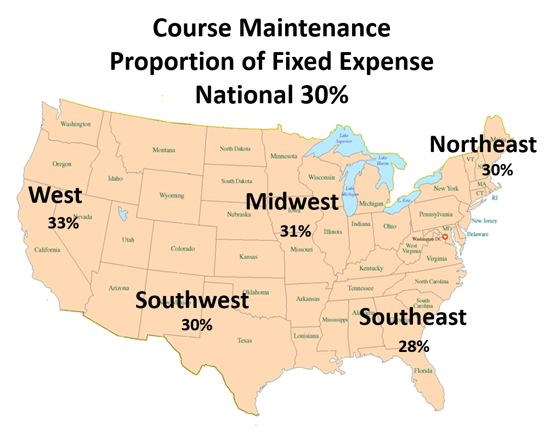 Conclusion
So, what does all this mean? We now know that individual data points, without the context of the bigger picture, can be misleading and are not an appropriate source of guidance and support in the decision-making process. Next time you’re in one of these discussions, remember that your club, like all clubs, is subject to the common industry business model and your budget is driven by your gross profit. Having a clear understanding of what has been revealed by the study of industry data will help you have strategic fact-based discussions about your own course maintenance budget.