Better Governance Begins with Board Education 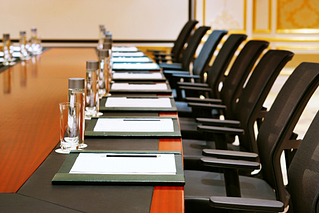 One of the most unusual aspects of life as a professional club manager is the idea that you get a new boss every year or two thanks to board turnover. Over two or three decades in the business, you could potentially work for dozens of club presidents and hundreds of different board members. Many of those bosses will be strong, positive leaders, some will be neutral influences, and then there are the others—the agenda-driven or opinion-driven presidents or board members who leave you questioning your career choice and fighting to keep the club healthy and on track until the next election.

Frequent turnover of a club's board can be tough on the management team and it can be even more hazardous to the long-term health of the club. Without a consistent framework for governance that replaces opinion with fact and relies on data rather than emotion in the decision-making process, it’s very easy for clubs to lose sight of long term plans and drift away from their original mission over time.

Laying the groundwork for a standard of governance that will withstand time and leadership transitions isn’t easy, but it is possible. It starts with board education and it requires consistency, patience and a plan.

The first step in a proactive approach to strengthening your club’s governance model is to take a good look at the information you’re providing for board members at the beginning of their terms. Consider that each of these successful individuals brings with them a deep knowledge of their own particular business. While that unique perspective is an important part of their value as a board member, it is imperative for them to understand from the very first meeting that unless they happen to be a private club manager, the model of their business is not the same as the club business model.

Typical board orientations tend to focus on club financials, board policies, long-range plans etc. Ideally, establishing a common understanding of key facts and what matters (or doesn't) in terms of financial and operational success would start right there—as part of the orientation process. Imagine what might be accomplished in future board meetings if every board member started his or her term with a solid grasp of even just a few essential facts about the club business model. For example, the difference between and significance of dues revenue and food and beverage (F&B) revenue. The following are examples of just a few core concepts that could serve as a starting point for your next board orientation:

1. Food & Beverage is an Amenity, Not a Profit Center

While it is unquestionably one of THE most important amenities in any club, F&B does not function as a profit center. It’s a concept that most boards have a hard time embracing, but we’ve found that graphic illustrations like the chart below can be very helpful. The pie on the left (which reflects real data from more than 1,000 clubs) represents the sources of a club's revenue. The orange slice (29 percent) represents revenue coming from F&B. In the pie on the right, we net out revenue-producing departments to look at sources of the club's gross profit and the F&B slice disappears completely. According to our data, about 70 percent of clubs in the United States subsidize their F&B operations: in the other 30 percent, F&B represents only a tiny percentage of the money the club has available to fund to its operate. For more on club F&B revenue, visit www.clubbenchmarking.com/food-and-beverage. 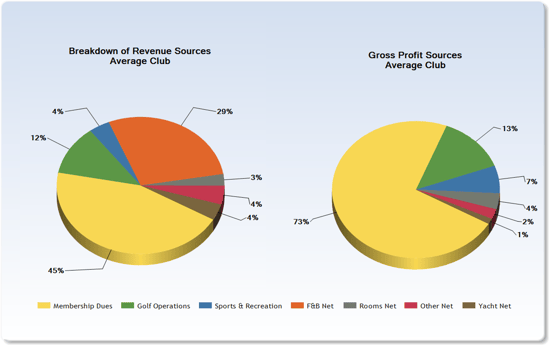 2. Clubs are in the Dues Business

This is an essential concept, and yet it's one that some board members will spend their entire tenure trying to avoid. Club industry data in the chart above shows that dues revenue makes up nearly 50 percent of all the revenue a club produces. The profit margin on that dues revenue is 100 percent. When you net out all the revenue producing departments including F&B, money from dues represents 73 percent of the remaining dollars available to cover the club's fixed expenses (the club's gross profit). Every board member should be very clear on the idea that achieving and maintaining a healthy flow of dues revenue is a top priority and the key to the club's long-term financial sustainability. 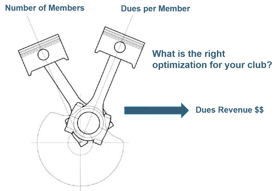 Healthy dues revenue requires a proper balance of dues rate and member counts. We call that combination the “Dues Engine.” and having discussions in the boardroom about either dues rates or member count in isolation blurs the critical relationship between both "cylinders" of the engine. You’ll find a video that lays out the concept of the Dues Engine in our video library at www.clubbenchmarking.com/club-dues

Laying the groundwork for an effective and enduring governance model is a solid investment in the future of your club, and it begins with a committment to fact-based board education.

We presented the idea of simple facts as a foundation for board orientations during a webinar in 2014.
That recorded session expands on this article and it is available at www.clubbenchmarking.com/board-orientation