Club Benchmarking, the leading provider of business intelligence and data-driven insight for private clubs, has released the first view of COVID-19 impact on the private club industry.

The Club Benchmarking Strategic Monthly Dashboard (SMD) is a free business intelligence service for the private club industry that makes it possible to systematically measure monthly trends in Membership, Cost of Belonging, Initiation Fee and Joining, and Finances. More than 250 clubs in 38 states and four Canadian provinces are currently using the service, and participation is growing rapidly in response to the economic shutdown that began in mid-March. Analysis of year-over-year data from March 2020 versus March 2019 provides the first assessment of the financial impact of COVID-19 shutdown on the private club industry.

"As a club board member during the 2008-2009 economic meltdown, I was stunned to discover the club industry had no reliable source of benchmark data to guide the decision-making process. We built our annual benchmarking platform in 2009 to fill that gap." said company Founder Ray Cronin. "Over time, use of data became recognized as a best practice and clubs started asking for appropriate monthly KPIs for senior staff and board. Our Strategic Monthly Dashboard addresses the industry's need for accurate market trend data that allows clubs to navigate both up and down market cycles with clarity."

Like many other businesses, private clubs began shutting down on March 16th meaning activity for at least half of the month of March was relatively normal. Many clubs pivoted quickly to engage members with take-out dining which appears to have muted the decline in non-dues revenue. For clubs without golf i.e. yacht clubs and city/athletic clubs, non-dues revenue declined more severely than it did for clubs with golf — 39.2% versus 33.2%. 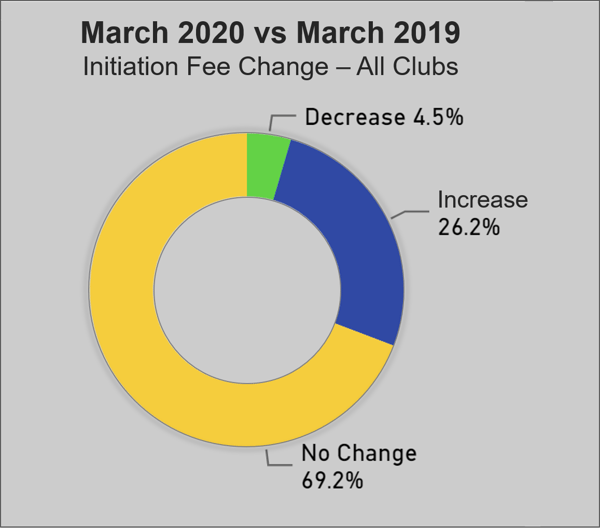 Dues Revenue, the primary source of money to fund club operations, increased 3.7% at the median year over year for clubs with golf and 3.6% for clubs without golf.

Among all clubs, debt decreased 5.3% at the median year over year, while capital investment declined 14.6% in March 2020 from the prior year.

Club Benchmarking will continue to monitor and report on how the COVID-19 shutdowns are affecting private clubs. To learn more about how your club can get access to the Strategic Monthly Dashboard, visit www.clubbenchmarking.com/monthly