Through the lens of the Available Cash Model, club leaders can identify opportunities for improvement and align themselves around a common set of priorities. 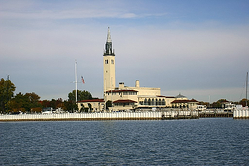 Club Description:
Established in 1914, the Grosse Pointe Yacht Club (GPYC) has a longstanding reputation for excellence and has been consistently recognized by the Platinum Clubs of America as one of the nation’s premier yacht clubs. Situated on the shores of Lake St. Clair just 15 miles northeast of downtown Detroit, the club’s centerpiece is its 75,000 square foot clubhouse, one of the largest in the country for clubs of any kind. The GPYC grounds include a state-of-the-art swimming pool, tennis courts, paddle tennis, a bowling facility and a 268-well harbor. The club engages members of all ages by providing a vast array of services and programs designed to appeal to their shared interests and collective passion for the GPYC.

Club Background
In 2009, the Grosse Pointe Yacht Club was just five years away from its centennial celebration. The recession had taken a significant toll on the U.S. economy, and changed American attitudes about discretionary spending. The state of Michigan had been hit particularly hard and by early 2010 unemployment in nearby Detroit was approaching 30 percent.

As economic pressure increased, clubs of all types and sizes were finding it increasingly difficult to attract and retain members. GPYC was not facing a crisis, but the board was committed to proactive, strategic leadership to ensure that the club would continue on a path of success and prosperity into its second century. During his 2012 term, Commodore Ronald Schaupeter offered this perspective on the club’s upcoming centennial: "It will be a time for looking back, for remembering all the great people and traditions and events and history that have made this club what it is," he said. "But it will also be a time for looking forward, for sharing our vision of the future, and for fulfilling our obligation to future generations to give them a yacht club that is as healthy and relevant as the one we joined years ago."

In 2013, stewardship of the club was passed to Commodore William Vogel and the club’s commitment to a bright future continued. Vogel and GPYC General Manager Tom Trainor began the year by reaching out to Club Benchmarking for a complete analysis of the club’s financial and operational health.

During the retreat, Cronin confirmed that overall the club was in relatively strong financial health. In terms of membership, he described the balance between the number of GPYC members and the amount members paid to belong to the club (aka the dues engine) as typical of an exclusive club with somewhat higher dues and lower member counts. The model could be deemed appropriate for GPYC as long as it was in keeping with the club’s culture and providing adequate dues revenue to fund the operation. With a clear understanding of their dues engine, the leadership of GPYC was better equipped to make decisions about maintaining or adjusting that model going forward.

The benchmarking process showed the club’s F&B performance was in line with industry norms. In keeping with the service expectations of a premier club, labor ratios were somewhat higher than other clubs. That finding was not a surprise or a cause for immediate action, but having the information on hand equipped the board with facts for any future discussions. The benchmarking process also provided context for certain variations in GPYC’s business model. For example, a portion of GPYC revenue is generated by a cell phone tower on club property.

One of the most important revelations for the board was seeing the actual impact of the facility itself on the club’s finances via Club Benchmarking graphic reports. Preliminary analysis showed Buildings & Maintenance expenses roughly 10 percent higher than industry norms, due in large part to the sheer size of the clubhouse. 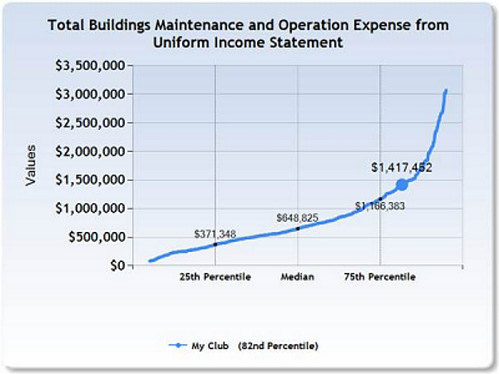 Data-Driven Results
Viewing their club through the lens of the Available Cash Model gave the board new insight into the significance (or insignificance) of various financial and operational issues. Instead of having individuals on the board with differing views of what was important and why, they were able to work together to identify opportunities for improvement and achieve alignment as a governing body based on a common frame of reference.

After reviewing the facts, it was clear to the GPYC board that planning for the future care and upkeep of the facility needed to be a top priority. As a foundation for that plan, the club’s finance committee drove the creation of an excel spreadsheet which projects capital expenditures 40 years into the future. They now have a powerful, fact-based tool which tracks the useful life and anticipated repair or replacement of each item on the club’s fixed asset list. As a compliment to that view of the future, Club Benchmarking reports and comparisons make it possible for GPYC board and management to monitor the club’s financial balance and identify new opportunities in real time.

General Manager Tom Trainor said that while Grosse Pointe Yacht Club is one of a kind in terms of atmosphere and culture, seeing the consistency of the Available Cash Model was an important lesson for the board. “Grosse Pointe Yacht is a special club, but this process has proven that as a business, we are not unique,” Trainor said. “There is a common business model among clubs which is consistent regardless of their individual personalities and that was really an eye opener for the board. The Available Cash Model very quickly illuminates the strategic issues – the strengths and opportunities for any club.”